As I seem to be in a bit of a fallow period blogwise I thought I would write some random reviews.
This involved taking items from the shelf (with my hand; see pics) without looking at them and then listening to them and writing a little bit about them whether I felt like it or not.
To make sure I write something I have imposed the following structure:

INFO (artist, title, date, etc)
WHERE/WHEN/WHY (ownership details)
REVIEW (review)
VERDICT (rating, in stars out of 5 for quality and 'cups of tea' out of 5* for to-my-tasteness)


*The 'cups of tea' rating was used in a great, eccentric fanzine called Kentucky Fried Afterbirth, which was (or is? I have no idea if it has survived in the post 2000s but I hope so) entirely the work of one man, 'Grey'. It was very funny and Grey utilised the 'cup of tea' rating as a way of giving fair reviews to work that wasn't really to his taste. I use it here for the same purpose, with thanks to Grey.

My 'storage system'. The tatty yellow sleeves are home made ones from the days when I tried to keep my singles nice
I don't own a vast amount of 7"s and I don't store them very nicely (see pic). I have randomly grabbed a chunk from the shelf. Here's what I think of them:
INFO
Can: I Want More/More
(Virgin, 1976) 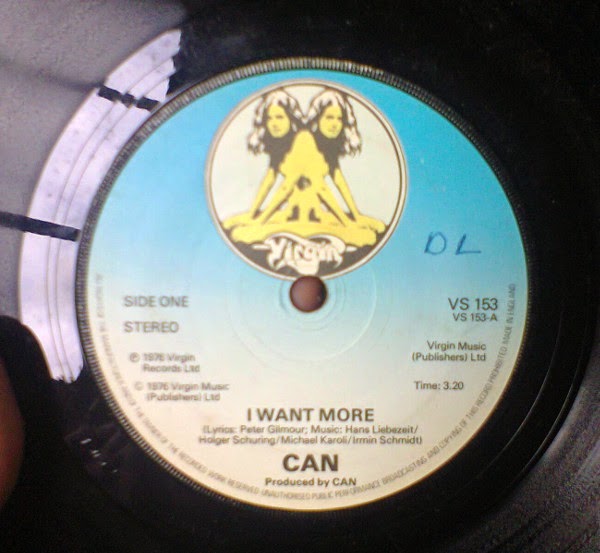 WHERE/WHEN/WHY
In a charity shop at some point in the early 90s, out of curiosity having read about Can but never heard them
REVIEW
Pretty much a disco single, albeit a peculiar one, this is far from the best thing Can ever released, but is pretty good nonetheless (and seeing the band on Top of the Pops miming to it  for bemused youngsters is a bit creepy: http://youtu.be/-9nFglCyshY). The shimmering guitar part influenced Johnny Marr's iconic playing on The Smiths' classic How Soon Is Now and electronic elements are dated in an extremely likeable way. The b-side is (as one would expect) more of the same. 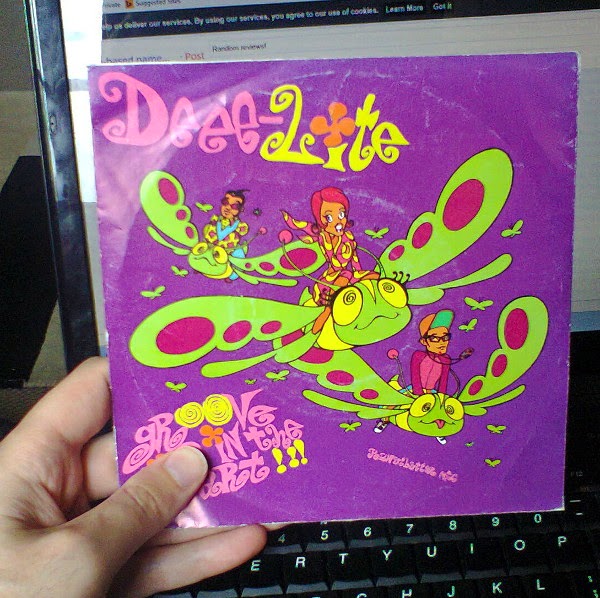 WHERE/WHEN/WHY
Don't remember where, when is in a fit of nostalgia in the early 2000s, why is because of my age
REVIEW
Seriously dated but still fun, if a bit insubstantial. The best thing about it by far is the sample from Herbie Hancock's 'Bring Down the Birds' although Lady Miss Kier's voice is pretty good. The b-side (also from their debut album) is far more house music-y and suffers from tinny beats, but only sucks a bit. 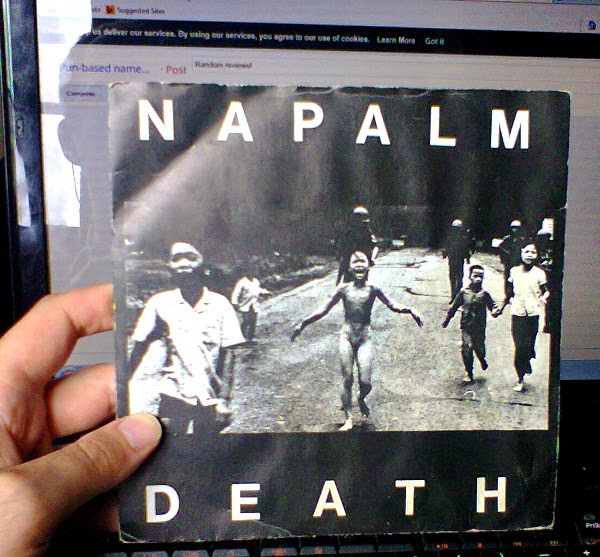 REVIEW
Hmm. My favourite Napalm Death music ever is the first side of Scum. I love it, I love the (non)production, everything. From Enslavement to Obliteration (and indeed side two of Scum) I like less, I can never put my finger on why really, kind of like Extreme Noise Terror, to all intents and purposes the same as ND in the later 80s but I am just not keen on their music. All that said, this EP is pretty good;  The Curse is doomy and miserable, everything else is classic manic grind 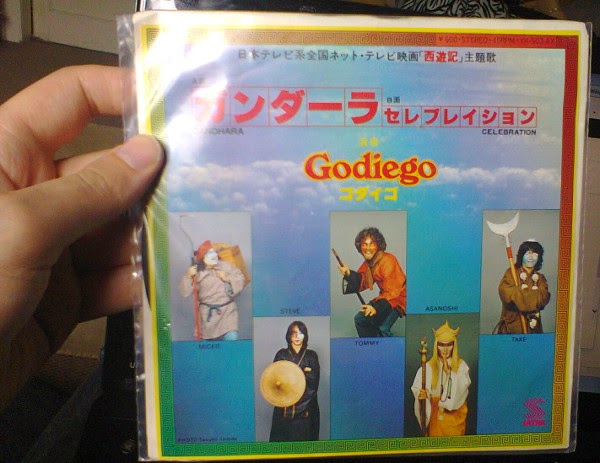 WHERE/WHEN/WHY
On the internet, 2005-ish, nostalgia: it's the end theme from Monkey! (aka Monkey Magic, aka Magic Monkey), a childhood favourite and also because I like a lot of Japanese GS music from the 60s/early 70s and onwards; plus Japanese singles are nicely packaged and, when buying from Japan, nearly always in amazingly good condition AND the sleeve features the band members dressed as characters from the show.
REVIEW
As music, it's soft, cheesy rock with a narrative about seeking enlightenment (i.e. the story of Monkey. The b-side is marginally more anthemic and rock, much less poignant. 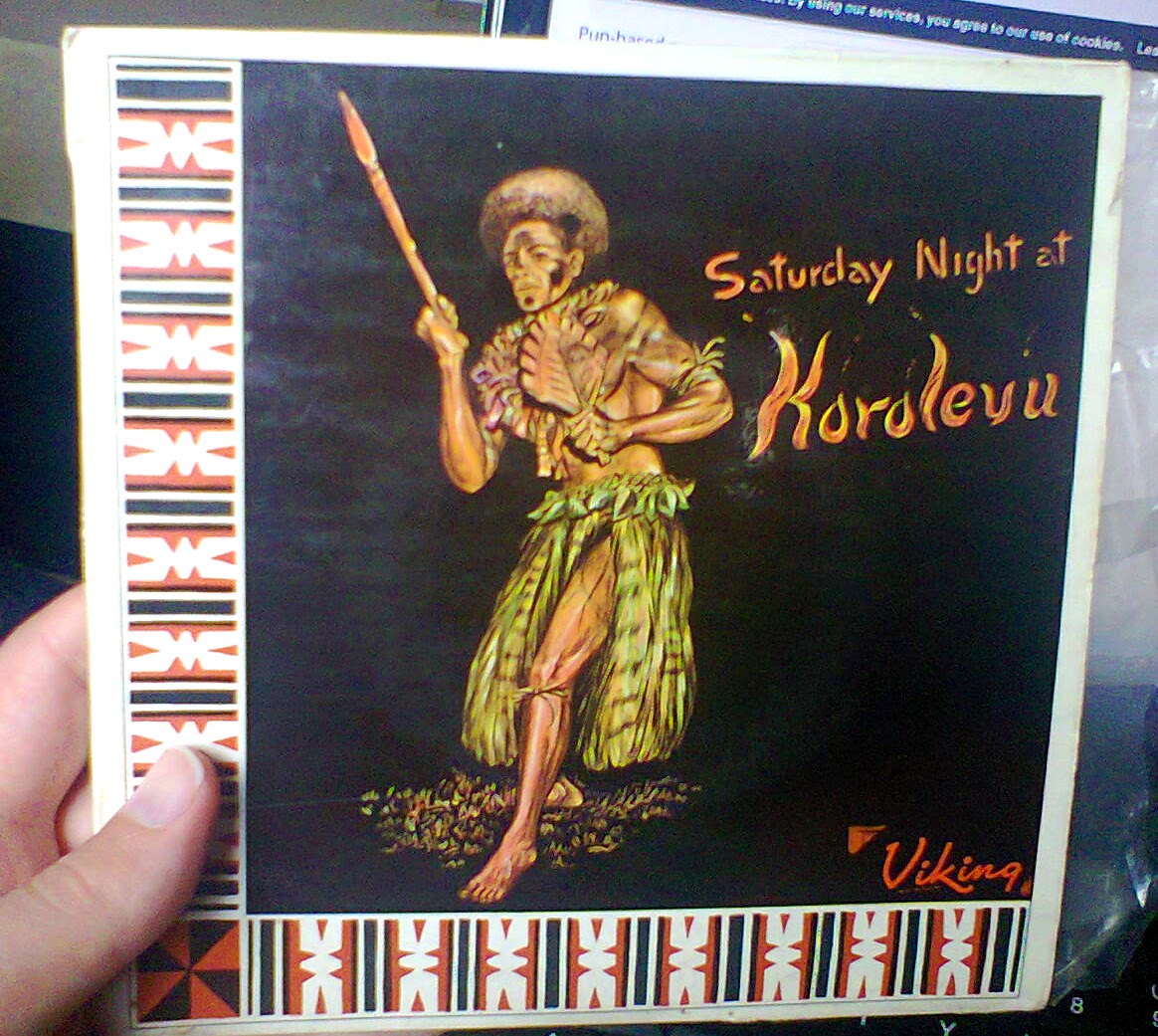 WHERE/WHEN/WHY
In some charity shop in the 90s, out of curiosity (and because I liked the sleeve)
REVIEW
This record was made as a souvenir for visitors to Korolevu, Fiji at some point in the (I think) late 50s). It captures the sounds of Fiji, interviews with pilots serving the tourists on the islands etc. Obviously completely cheesy and throwaway but actually very evocative, the privileged/Imperialistic tourism of the period now seeming almost as distant and exotic as Fiji must have to British travellers then.

INFO
David Bowie/Pat Metheny Group: This is Not America
(EMI, 1985) 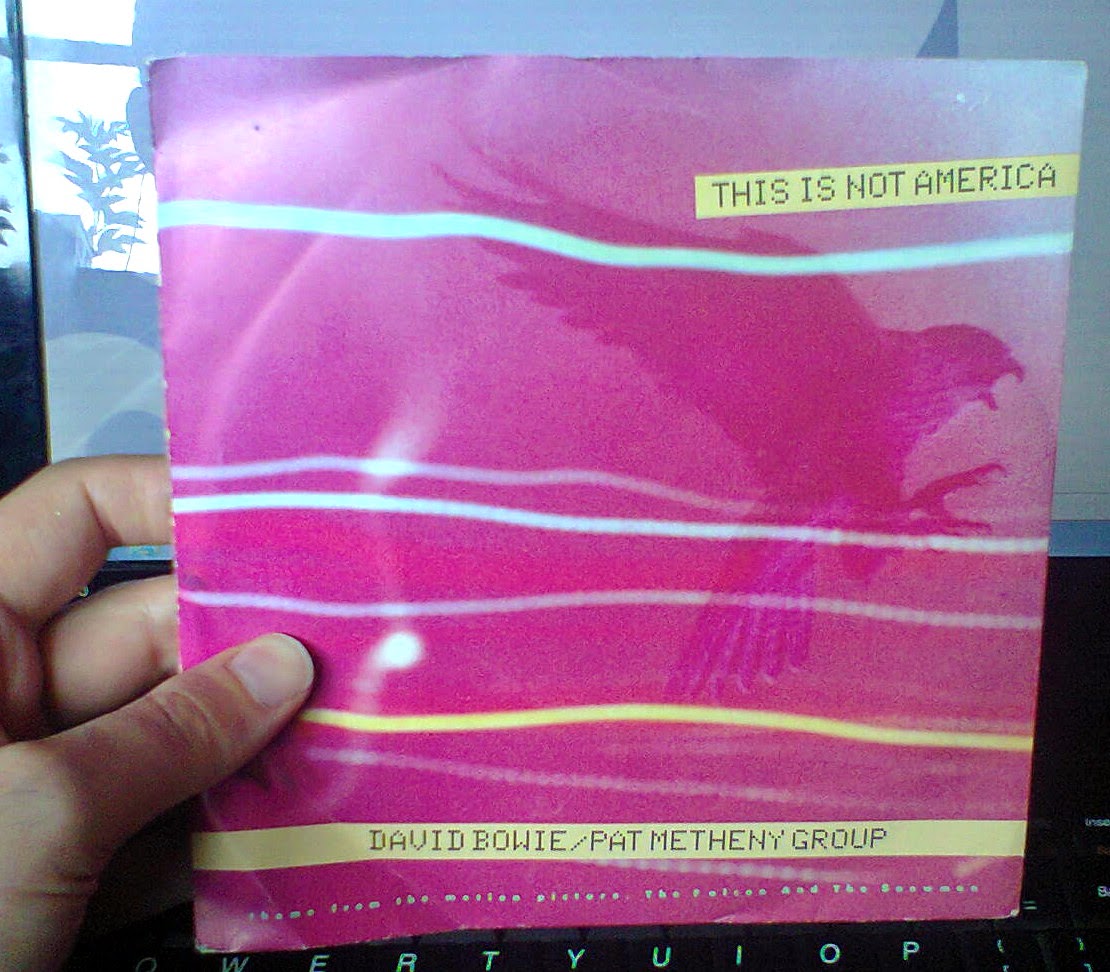 WHERE/WHEN/WHY
In some charity shop in the 90s, because I am a Bowie fan
REVIEW
This is semi-okay in a kind of 'Under Pressure' way. It's not classic Bowie, but it's no worse than his standard mid-80s stuff. VERY 80s, a bit easy listening and cheese-ridden. Only partly Bowie's fault; the instrumental b-side showcases the tired 'incidental music from an 80s TV movie' that sometimes great jazz guitarist Metheny and his synth-ridden group gave him to work with 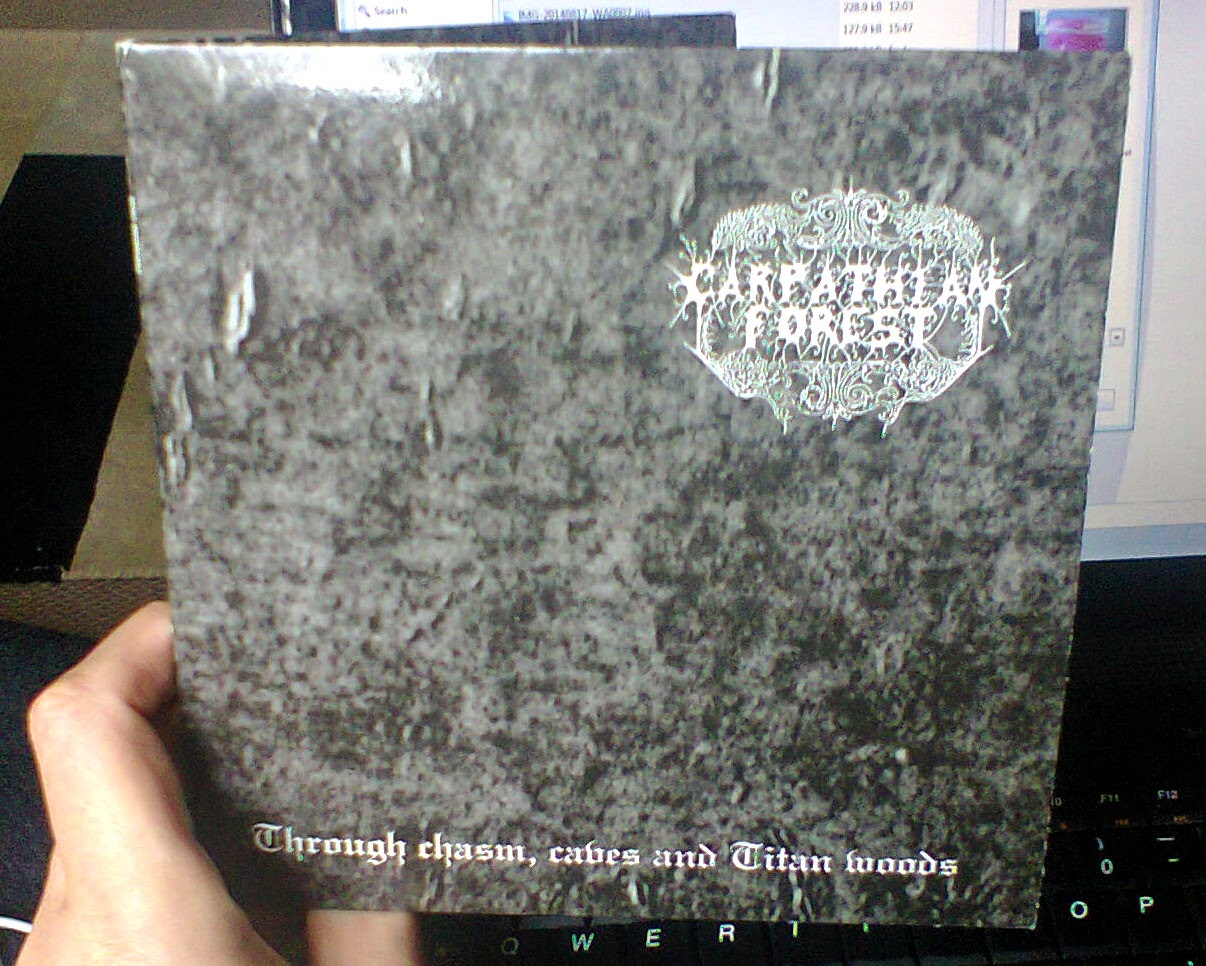 WHERE/WHEN/WHY
On the internet, in 2007 or so, because I wanted a vinyl version and this one, a 2x7" gatefold was the only one I could find that was pretty cheap. Annoyingly it doesn't have the original sleeve art but UNnoyingly it does have the lyrics printed in the gatefold.
REVIEW
Still my favourite Carpathian Forest release, this 1995 EP (recorded '91/2) is classic Norwegian black metal in a strongly atmospheric vein. My favourite of the all-great tracks here is their whispered version of Edgar Allan Poe's The Raven. Nattefrost is sadly underrated these days, but he remains to me one of the iconic figures of Norwegian BM. 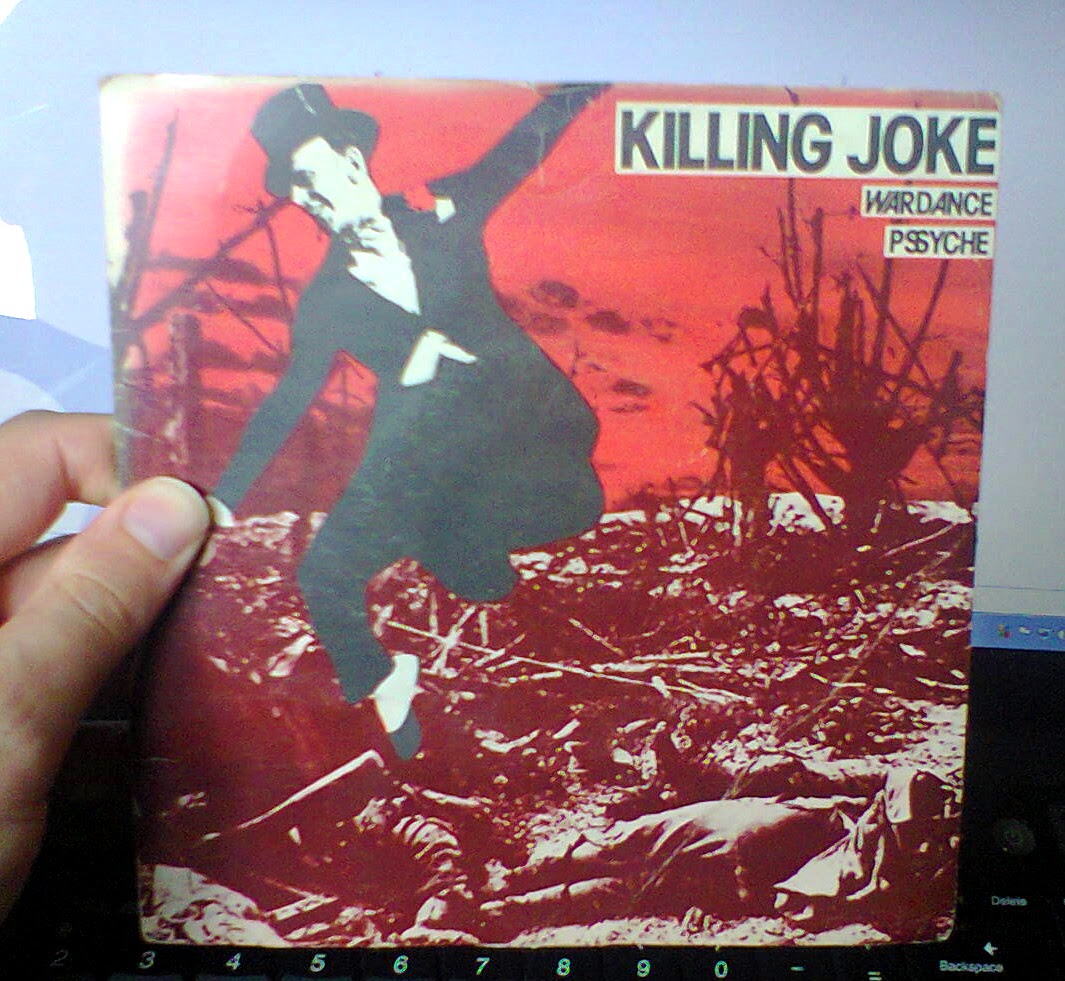 WHERE/WHEN/WHY
In some charity shop in the 90s, because I already loved their debut album
REVIEW
Just a great post-punk, semi industrial single, intense and angry but with a strangely pop gang-vocal chorus. My second favourite Killing Joke song after The Wait as it happens. The b-side is almost disco in its beat, I always think KJ are kind of like Joy Division music-wise (if not vocalwise) and this has an industrial/robotic quality and a sneering post-Johnny Rotten sneer but is lacking a chorus as good as the a-side. Still pretty good though. 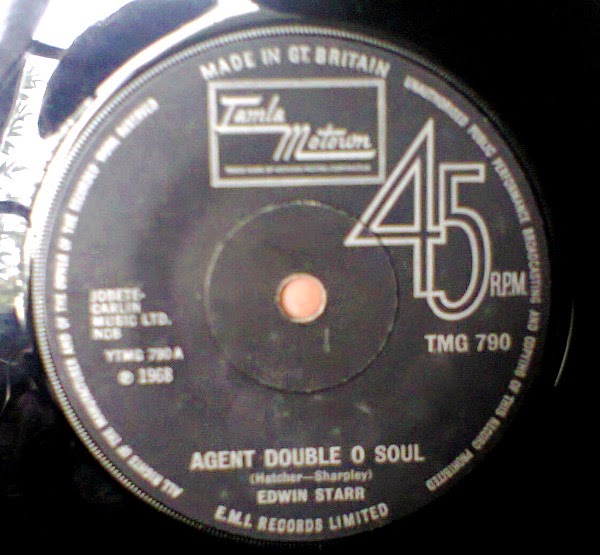 WHERE/WHEN/WHY
In some charity shop around the turn of the millennium; wanted it to be funkier
REVIEW
Actually a Motown reissue of Starr's 1965 debut (on Ric-Tic Records), these two songs (especially the B-side) are very strongly in what is senselessly called the 'Northern Soul' style; a shame, because I don't really like Northern Soul and was hoping for something in the 'Funky Music Sho Nuff Turns Me On' mould. His voice is great though. 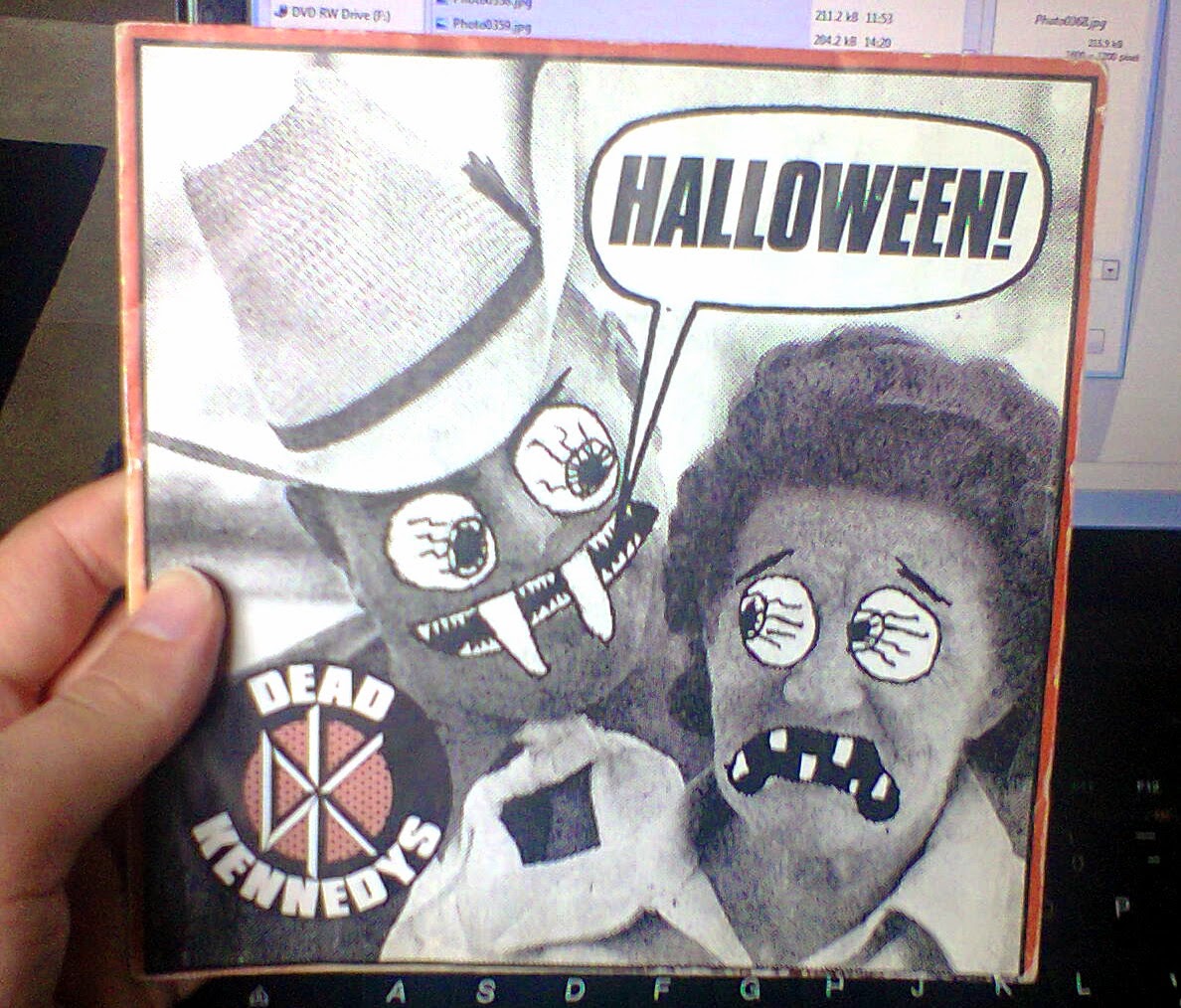 WHERE/WHEN/WHY
In a second hand record shop in the early 90s; because I was a big fan of the Dead Kennedys, who I still like
REVIEW
DKs last single (I think), this is classic, catchy and (relatively) commercial-punk DK song, despite the 'why don't you take your social regulations and shove them up your ass' refrain. Saturday Night Holocaust is a peculiar song, equating disco to Nazism (or something?) starts in a doomy, slightly tuneless way before becoming a jabbering Jello Biafra rant song; not bad though. 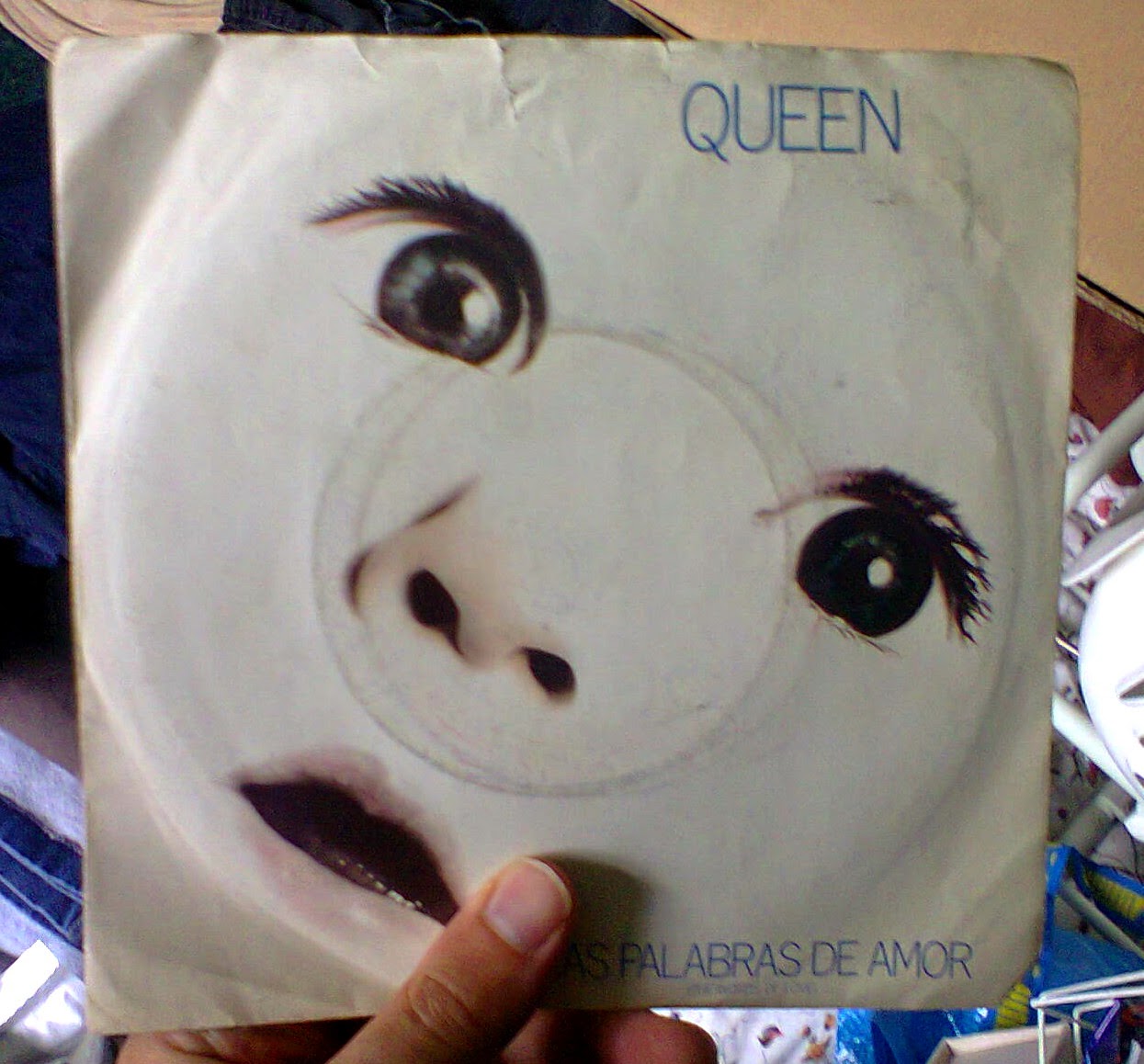 WHERE/WHEN/WHY
In a charity shop in the late 90s; because although not a big Queen fan as such I like some of their stuff, especially Hot Space, possibly their least popular album but I think one of their few underrated ones (see also A Day at the Races)
REVIEW
Somewhat cynically (or, being less cynical, generously)written as a singalong for Latin American fans, it's a big, spangly, not-bad power ballad. B-side Cool Cat is almost sleazy funk song and I really like it, especially Freddie's almost-too-high-pitched vocals and Brian May's clanky guitar.

This was fun; I'll have to do more eventually!
Posted by Will Pinfold at 09:19 No comments: